I actually accomplished something this year. That’s new.

I purchased my current bike in 2006.  At the time I was living in Chatswood and intended to get fit enough to ride to work in North Sydney.  That went well for a few months, unfortunately a month after buying the bike my company purchased another company, and decided to merge & move to the city.  Riding to North Sydney was already enough of a challenge for a very unfit me who hadn’t exercised since leaving school 10 years earlier.  That extra distance was a bit too far a bit too soon for me (especially the climb from Milsons Point station to the top of Miller St for the trip home in the evenings), and so the towel was thrown in and the bike had its first extended stint in the garage.  3 months and unknown km’s traveled, but if I recall correctly it was less than 200km.

2007 I may or may not have had another attempt at getting back into cycling.  I don’t know.  I wasn’t tracking my riding anywhere that I still have on hand.

2008 living in (very hilly) Macquarie Park now I signed up to www.bikejournal.com and did 170km.  Very short rides due to being out of practice, a heavy smoker, and the hills.  Oh god the hills.  Most attempts to increase just left me in pain either in my lungs, my legs, or both.

2009 126km in the first few months before I gave in.  Still a heavy smoker, lack of improvement, any attempts to go faster or further just resulted in pain to lungs, legs, or both.  Eventually gave up, this time with added anxiety about the potential impending pain if I did in fact go out.  Quite often I planned to but talked myself out of it, looked for excuses, because my mind was just telling me about the 2+ days of recovery I’d have _yet again_ if I pushed it just that little bit too hard for an ever so minor barely noticeable improvement.

2012, 73km.  One very short stint that lasted less than a month.  Still a heavy smoker, this time with anxiety before going out every time and sore lungs, legs, or both.

2013, I had my last cigarette in October the year before (2012).  Started out puffing just as much, legs just as sore by the end of the ride … but the next day, they were fine?  What?   No!  If they’re feeling like that at the end of the ride they should give me pain for the next 2-3 days, not be good to go on another ride again the next day if not less!  Recovery is not meant to be that fast!  What kind of demonic magic is this?  Is it, could it be, could _THIS_ be what not being a smoker is like?  Did cigarettes really hold me back _THAT_ much?

2013, many LONG periods of up to 3 months with zero riding.  It’s a combination of my own inherent laziness and (mostly) the anxiety from 2008-2009 still existing.  The hours leading up to the day/time I’ve decided I’ll do a ride, I still get it.  Anxiety.  All too often anxiety talked me out of going for a ride.  WELL too often.  This anxiety will need to be conquered, because despite the anxiety before a ride (usually starting at around 2:30pm for a planned ride with a 6:30pm departure), once I’m out on the bike I’m happy, and when I get home I’m bouncing off the damned walls – just ask Whoobie who usually cops me raving for an hour or two about each trip.  My anxiety born of 2008-2009 rides & pain did hold me back quite a lot though, to the point where I feared many a time my target of a meagre 500km would not be achieved. 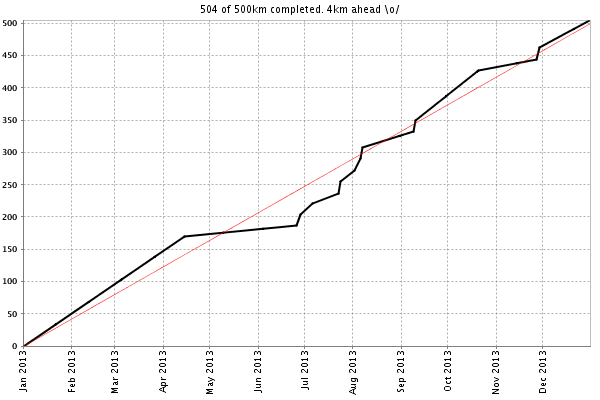 2014, to get this target I’ll need consistency.  The target is assuming my normal evening ride distance, but it needs to be done at least twice a week.  To get the consistency, I’ll need to conquer my anxiety.  The worst thing about anxiety is that it’s often not logical, and this is one instance where I know for a fact it isn’t logical.  I’m hoping this year will make the cycling anxiety a thing of the past.